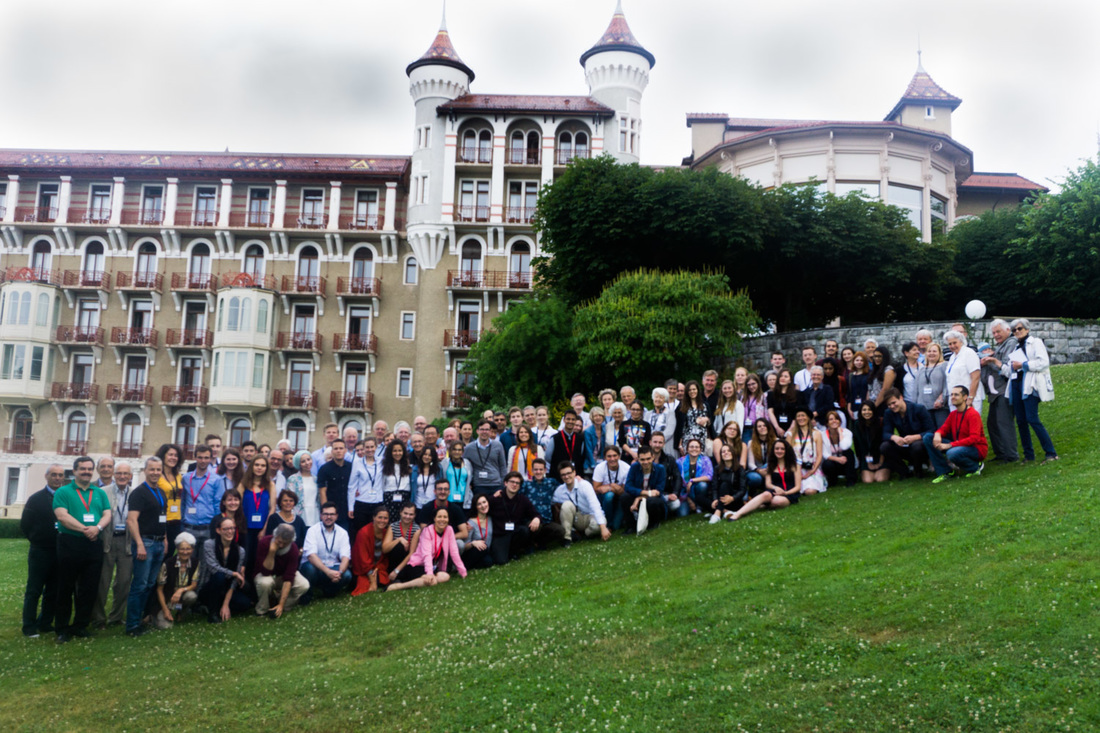 19–23 July. At a time when relationships within and between European countries  were under major stress, the opportunity to seek ‘new reasons for hope’ drew 148 participants from all over the continent to this year’s Addressing Europe’s Unfinished Business (AEUB) conference.    They came from countries as far apart as Spain and Russia, Cyprus and Norway, and from many walks of life, ethnicities and  belief traditions. More than half were  of the younger generation, including  Young Ambassadors, selected from  39 European countries. The conference started on an intergenerational note with two young people, Nouçayba Soltani, a post-graduate student from France, and Jonathan Nelson, a teacher from Norway, hosting a conversation with four pioneers of IofC’s reconciliation work in Europe after World War II.
‘Each of us has a responsibility to rethink Europe,’ Soltani said in her introduction. ‘Everyone can make their contribution. If we look around the world, there is war, refugees, and no one knows what to do. But Europe has faced great difficulties [in the past] and overcome them.’
‘New narratives for Europe’ was one of the main themes. Dr Margaret Smith, a faculty member at the American University in Washington DC, defined narrative as ‘a story that gives meaning to a larger group experience’. She said, ‘The narrative offered by Caux means bringing to life our best aspirations by figuring out how to live the values we talk about.’
Values were at the heart of another theme  of the conference, ‘Bridging the gap between our principles and our practice’. Philippe Herzog, a French former Member of the European Parliament, said, ‘What was done after the war was done by the elites and the people acquiesced. Now it is about the masses. Everyone has their contribution.  We must multiply individual initiatives, networks of people who get together because of their differences.’
Migration was of course on the agenda. The focus was on active citizenship, individuals taking inspired initiatives. Célia Demoor, from Calais in the north of France, attended a Caux Conference in 2015 and was inspired to raise awareness about the situation of migrant people in Calais. She now organizes dialogues between the town’s residents and some of the 7,000 refugees in local camps. Terttu Laaksonen helps refugees who came to her city in Finland. ‘It has given me hope to see how people are reaching out,’ she said. ‘Some “new Finns”, who had arrived earlier, were our interpreters, working alongside us at the railway station, in the camps.’ Apart from plenary gatherings, there were enquiry streams on such themes as ‘Learning to live in a multicultural Europe’, ‘The role of faith communities’, ‘Creating a just and sustainable economy’ and ‘Arts voicing the narratives of hope’. Participants also met in smaller groups to discuss the conference themes and share something of their  life journeys.

COMING TOGETHER FOR  EUROPE’S FUTURE
As part of the conference, this year’s Young Ambassadors’ Programme, where young people gather for a week to exchange opinions and ideas about Europe and its future, brought participants from 39 European countries. The programme’s goals were to break down barriers and create productive, innovative initiatives for the betterment of Europe as a whole. ‘The programme reiterates that what unites us outweighs what could ever divide us,’ says Eleni, a Young Ambassador who travelled to Caux from Greece because she ‘wanted to see how each of us, individually, can address challenges that we face regardless of our nationality’. During the week the Young Ambassadors were given the opportunity to examine their prejudices and preconceived ideas about  other European countries. ‘It’s a great opportunity for young people to meet and to exchange ideas, but also to make connections that will, I believe and hope, last for a long time,’ said Lazar from Serbia. ‘I’m fired up and ready to go.’

CULTURAL CHANGE IS NEEDED
Philippe Herzog, former European Parliamentarian and Founding Chairman of the Confrontations Europe thinktank, believes that transformation in Europe needs to start from a cultural perspective at this time of multifaceted crisis. ‘The challenge of a common culture was not raised after the war, because there was too much hatred among Europeans,’ he said. He pointed out that education was not included as part of the European Union’s competence within the Treaty of Rome. Citizens are now more educated than after the World War II, but they are educated with national ‘blinkers’. ‘We should not deny the differences but turn them into riches instead of divides,’ he stated. ‘ The programme reiterates that what unites us outweighs what could ever divide us.’
Eleni Young Ambassador from Greece